"Beer prices going up" editorial cartoon by Clifford "Baldy" Baldowski of the Atlanta Constitution, with a personal inscription to Manuel Maloof. To learn more about "Baldy" see his entry in the New Georgia Encyclopedia.

The artist behind this political cartoon in Clifford “Baldy” Baldowski. He was a cartoonist for local newspaper The Atlanta Journal-Constitution. Baldy was a widely acclaimed artist, even garnering a Pulitzer prize nomination in 1964 for his work on Barry Goldwater’s presidential campaign in the same year. For the majority of his career, his art was situated in the context of political Southern life. Baldowski used his art to draw attention to issues of social justice; he was a major figure in the fight for the desegregation of schools in Georgia. He created a reputation for being unafraid of any controversial issue during his time, and using humor to counteract the somber attitudes held towards controversies in his lifetime. Baldowski died September 27, 1999, but his work lives on in Manuel’s Tavern and within his editorial cartoon collection at the University of Georgia Library. 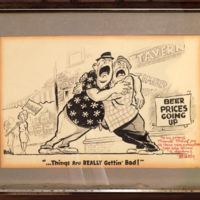